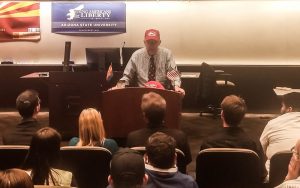 College Republicans United and Young Americans for Liberty care about out constitutional rights, including the 2nd Amendment. Together, we hosted an event on March 29 with guest speaker and gun-freedom advocate Dick Heller, whose assertion of his Second Amendment rights led to a landmark 2008 U.S. Supreme Court ruling which struck down provisions of the Firearms Control Regulations Act of 1975. 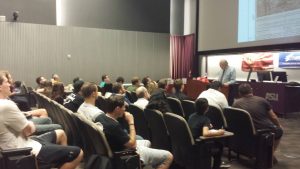 The 5-4 ruling affirmed the right of an individual to possess firearms for lawful purposes such as self-defense within the home. It also meant that individuals do not have to keep their rifles and shotguns unloaded and disassembled or bound by a trigger lock. Heller said the Second Amendment cannot be destroyed as it is the “backbone of the concept of freedom and an underlying principle that keeps the leaders from power.”

Heller said recent proposals to strengthen gun control, such as raising the minimum age to buy firearms and intensifying background checks, would damage that backbone and create a slippery slope that would eventually lead to the full repeal of the Second Amendment.

But the biggest problem of all is the lack of compromise. President of College Republicans United and education senior Richard Thomas said guns are not the problem, but rather that the left and right should focus on “common-ground solutions such as identifying early signs of mental illness in children and young adults. Any person who wants to amend the Bill of Rights is not an American,” Thomas said. “When you mess with the first ten amendments, you are fundamentally changing this country away from the foundation structure that made this land possible.”

In cooperation with Patriot Movement AZ, CRU marched on the Hayden Lawn at ASU on multiple days to speak with students and faculty members about our constitutional rights to own firearms. We also distributed flyers honoring Kate Steinle and other American citizens who were killed due to Democratic negligence. During our walk through we were approached by members of ANTIFA, which inevitably lead to a confrontation. The result of this incident lead to the arrest of one of their thugs.

March For Our Rights –

College Republicans United was invited to speak at the AZ Capitol about our constitutional rights, specifically the Second Amendment. MFOR is a non-profit organization which hosted rallies in 13 cities across the country. Members braved the heat in temperatures of 111F. Press interview with CRU here.