Recently, an article showed up on a small tabloid about blackmail attempts on our student organization by people removed from CRU. This is nothing but a hit piece and not worthy to reply to directly.

These former members cherry-picked excerpts out of context from our old Facebook Messenger CRU chat and released them to the State Press around November of 2018, and again with the Phoenix New Times late in March of 2019. It’s a shame that we have so-called fellow “Republicans” who are stooping so low to use leftist rags to attack other Republicans, when the same could be done on their own words just as easily. [1] [2] [3] [4] [5] [6] [7] [8] [9] including voice recordings [1] [2]

In September of 2018, it was brought to our attention that Kevin had posted a response to a question directed to him from an unrelated social media board on Facebook. The thread in question had dozens of users from across the country; the tone of the thread was openly hostile towards African-Americans, and hostile to Kevin for having Candice Owens as his avatar. Kevin’s response was dismissive of the racial tone of the thread. Upon discovery of the posts, three members of College Republicans United came forward and expressed their concerns to the Executive Board. Each called for Kevin to be banned from attending future meetings.

Any member who has taken issue with the conduct of an attendee. Is free to voice their concerns to the executive board, privately if necessary. If the concerns are found to be legitimate, the accused member shall be issued a verbal warning to make amends and correct their behavior.

If the accused member has not corrected their behavior and/or there are repeated instances of misconduct, than concerns should be brought forth to the executive chair. If the executive chair finds that the accusations are beyond a reasonable doubt, then he should file a motion to start the expulsion process.

A verbal warning was not well received by the three members who insisted on an immediate ban.  The Executive Board of the College Republicans United, accusers, and the accused held a video conference to discuss the evidence and to determine a proper solution. By a vote of 3 to 1, the Executive Board decided not to ban Kevin, and unanimously issued a warning that future affiliations with such Facebook groups would result in immediate consequences.

Even after an irregular executive session to address these concerns, the three members did not accept the result and continued to complain to other members.  These ill feelings were further exacerbated due to the upcoming executive elections, where these individuals believed they were no longer likely to win their desired positions as President and Vice President of College Republicans United respectively.

In our opinion, they changed strategies from earning votes to finding ways of removing members who wouldn’t vote for their ticket. In the past, they tried at different times to get members to quit the club for being Libertarians, being in the wrong clique, being “frat-like”, being too liberal, being too conservative, they harassed women on their physical appearance, and labeled people they didn’t like as alt-right.

Since then, these members quit the club and began a harassment campaign on multiple members, which includes examples of blatant misogyny towards women,  [1] [2] [3] and to shut down College Republicans United.  In January of 2019, two of the former members crashed our meeting disrupting the event until police forcefully escorted them from the meeting room. In February, these former members again were caught taping excerpts from Facebook conversations on the college campus during our Juanita Broaddrick event. 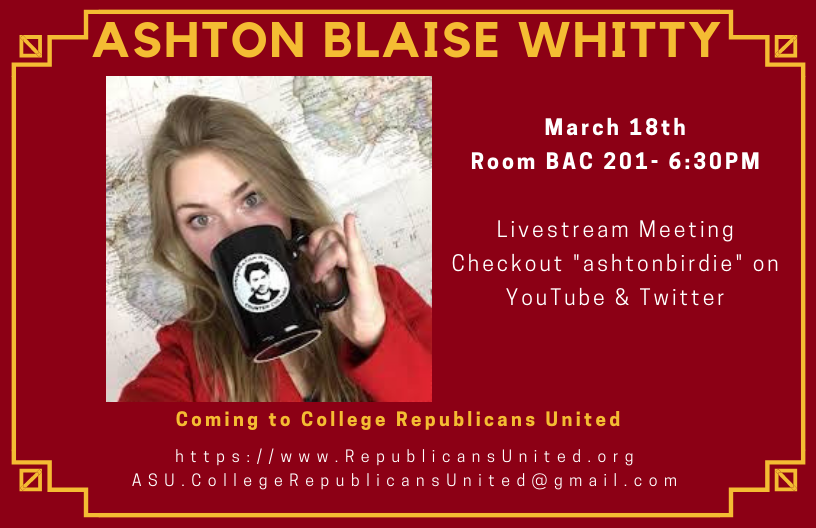 In February, College Republicans United announced that we would be hosting Ashton Blaise Whitty at Arizona State University. The intent was to have Ashton speak about current events, her time with the College Republicans at UC Berkeley when Antifa rioted in 2017, and to advertise our club to her larger audience.

CRU is mentioned by Ashton several times on Twitter and Facebook with no attention from extremists groups on Facebook. There was no indication of Ashton bringing any guests or plans that we knew of to disrupt our event.

On March 18th: Ashton arrives late to the meeting and is accompanied by Tim Gionet, aka Baked Alaska, her boyfriend. Tim sets up Ashton’s camera and moderates the livestream for Ashton’s YouTube account during the meeting, which can be found here. (Video Pending)

Once the event finished, members began to speak with Ashton and Tim directly. During these conversations, many members began to grill Tim on his political views, his association with the alt-right, Charlottesville, etc. We were pleased to hear Baked Alaska renounce ethno-nationalism and white supremacy. He said at some point he would love to hold a forum at ASU about why he left the alt-right and wanted an opportunity to urge other extremists to change their minds. Members of CRU were impressed with his articulation and genuine attitude of remorse.

We believe in Christian values of forgiveness and believe that people can change and redeem themselves over time, opinions are not set in stone. Unlike liberals, we understand you are not going to change minds without any attempt towards reconciliation or constructive dialogue.

On March 20th, CRU received a letter from Steven Hsieh, a staff writer for Phoenix New Times. He previously worked at The Stranger and Santa Fe Reporter, all of which are far-left news publications.

Phoenix New Times wants to focus on Baked Alaska to push a narrative, despite being informed he was not invited to the event. The author also completely misquotes Richard Thomas the same way as the State Press without asking for clarification or research on the topic. Had they done their due diligence of fact checking, they would have seen evidence that Richard was quoting Margaret Sanger, Founder of Planned Parenthood, in a debate on abortion with another individual from years ago and was taken out of context. The intended goal was to spread libel and smudge CRU’s reputation. Being facetious is not the same as endorsing aberrant policies. Journalists have a responsibility to fact check. The Kekistan flag for example was not Richard’s but was brought by another member who was eventually banned from the club.

One of the most controversial images released was taken during a private Halloween Party. Richard and other people were handed the objects, not realizing he was in front of a Dodge Challenger. It should be noted that Cody in the same photo is half Filipino and Jewish.

The picture were acquired by the former members who had plans to use this as blackmail in retaliation for not being endorsed by Richard for leadership of CRU. At no time has Richard or CRU ever supported racism or what happened at Charlottesville. To this day, CRU has protested the murder of Heather Heyer. CRU preaches non-violence within the greater society.  We have previously banned white-supremacists before, and we will continue to keep out legitimate racists. The club has a constitution which outlines the rights of our members, and the Executive Board has upheld those rules to the letter.

College Republicans United should be judged on the public work we have done, judge us on our accomplishments and failures. Don’t judge us based on private conversations that were said to former members who had the ill intentions of using blackmail on club members.

College Republicans United endorses the right of members to express any opinions without censorship or restraint. The only time College Republicans United has banned members is when their actions have become disruptive to the operations of the club. What people say in private is not a metric by which we judge members. We are proud of the work we have done this past year to strengthen the conservative movement in Arizona.