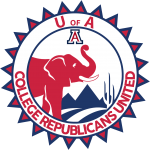 For as long as we can remember, the west has been neglected by the College Republican National Committee. Most of the Chairmen come from the east, all of the CRNC conventions take place in the east, the money goes to the east, and the west is left alone. At times, the western half of the federation appears to be invisible to the rest of the organization, which has presented a real and pressing problem for the longest time. Simply put, the College Republicans from Arizona, and the rest of the west coast want better leadership. This ineffective relationship between the organization and its members will only hurt the conservative cause, not strenghten it. Of the current set of candidates running for federation leadership, none have put the interests of the west or the conservsative movement to the front. This be a sign of a vote of no confidence for any individual running for the CRNC for the aformentioned reasons.

The club also has qualms with the state federation. During the 2020 election year, there was a lack of communication between the AZFCR and the individual College Republican clubs. Despite being one of the most important elections in recent history, there were no attempts to coordinate any state wide events. Oftentimes, it felt as if each of our clubs were stuck in our own spheres by ourselves, a trend that would persist even after the election. Our club did not get the support it needed by either the CRNC, or the AZFCR. We did not get funding, coordination, or even an attempt at contact. It’s no secret that COVID-19 left everybody in disarray. During a crisis like this, it was essential to receive support and guidance from the federation. However, we ended up funding, recruiting, and coordinating events by ourselves. If the federation cannot support us, then we will have to look elsewhere.

We look forward to working with an organization that is activism-oriented in nature which will allow us to be more involved in our community. This new affiliation will enable us to hold more events beyond weekly meetings which will unite our members further and create a more immerstive member experience. Most importantly, College Republicans Untied will provide us guidance to ensure our chapter exists for many years to come. This is the future of the conservative movement and as we challenge the status quo, we must remain true to our values and ourselves. Our organization at Univeristy of Arizona is excited for this next chapter and looks forward to what our affiliation with the College Republicans will bring.

Last night, a unanimous decision was made amongst the voting members of the College Republicans at Iowa State University to fully decouple and leave both the legacy and club name associated with Iowa Federation of College Republicans (IFCR) and the college Republican National Committee (CRNC) behind us. We have officially chartered with College Republicans United instead, and we will be changing the name of our club accordingly. This was not an easy decision, nor one taken lightly, but it has been determined to be necessary in order to continue championing authentic conservatism in the state of Iowa. We have always been dedicated to fighting for what is right, and that includes working against Republicans in name only (RINOs) that seek to liberalize and destroy the Republicans Party from within.

Throughout our years as a chapter, we have never seen assistance from the IFCR or CRNC in many regards.  Whether it was with campaigning or legislating, we had to work on these issues alone. We have worked successfully in many regards, from helping congressional and Presidential campaigns win in Iowa, to running 11 students for our Student Government and winning a near-majority. We have always taken pride in being College Republicans, but we do not believe that the groups associated with the ‘College Republicans’ name reflect conservative values anymore.

We have seen time after time a lack of professionalism from the IFCR and CRNC, whether it was contacting our places of employment due to disagreements on social media, swearing at, and making inappropriate remarks towards our members and executive board, or holding a secret midnight defederation vote for our chapter (to which members of the IFCR central committee in support of our chapter were not invited). Many chapters of College Republicans came to our defense against the improper removal, we commend those chapters and federations that fought against RINO cancel culture. The IFCR continues to cede ground to the left, chastising anyone to the right of the Establishment.